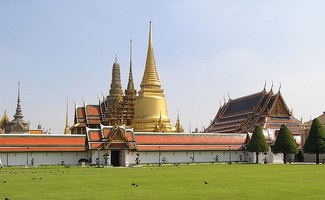 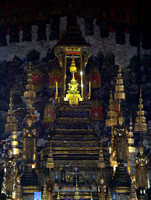 The Wat Phra Kaew (วัดพระแก้ว / Wat Phra Kaeo / Temple of the Emerald Buddha / Wat Phra Si Rattana Satsadaram / วัดพระศรีรัตนศาสดาราม) is regarded as the most sacred Buddhist temple (wat) in Thailand. It is a "potent religio-political symbol and the palladium of Thai society". It is located in the historic centre of Bangkok (district Phra Nakhon), within the precincts of the Grand Palace.

The main building is the central ubosoth, which houses the statue of Emerald Buddha. The legendary history of this Buddha image is traced to India, five centuries after the Lord Buddha attained Nirvana, till it was finally enshrined in Bangkok at the Wat Phra Kaew temple in 1782 during Rama I's reign (1782–1809). This marked the beginning and raise of the Chakri Dynasty of the present Kingdom of Thailand (the present head of the dynasty is King Rama IX. The Emerald Buddha, a dark green statue, is in a standing form, about 66 centimetres (26 inches) tall, carved from a single jade stone (Emerald in Thai means deep green colour and not the specific stone). It is carved in the meditating posture in the style of the Lanna school of the northern Thailand. Except for the Thai King, no other person is allowed to touch the statue. The King changes the cloak around the statue three times a year, corresponding to the summer, winter, and rainy seasons, an important ritual performed to usher good fortune to the country during each season.

While legend traces this statue to India, its rich historical records dates its finding in Cambodia in the 15th century, moved to Laos in the 16th century and then to Vientiane where it remained for 215 years, and finally to Thailand in the 18th century. Considering the long history and Nagasena's (a Brahmin who became a Buddhist sage and lived about 150 BC) prophesy that the Emerald Buddha would bring "prosperity and pre-eminence to each country in which it resides", the Emerald Buddha deified in the Wat Phra Kaew is deeply revered and venerated in Thailand as the protector of the country.