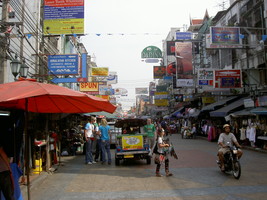 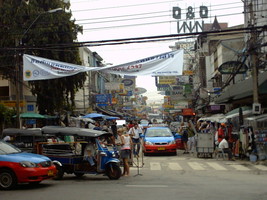 Khaosan Road or Khao Sarn Road (ถนนข้าวสาร) is a short street in central Bangkok, Thailand. It is located in the Banglamphu area of (Phra Nakhon district) about 1 km north of the Grand Palace and Wat Phra Kaew.

"Khaosan" translates as "milled rice", a reminder that in former times the street was a major Bangkok rice market. In the last 20 years, however, Khaosan Road has developed into a world famous "backpacker ghetto". It offers cheap accommodation, ranging from 'mattress in a box' style hotels to reasonably priced 3-star hotels. In an essay on the backpacker culture of Khaosan Road, Susan Orlean called it "The Place to Disappear." It is also a base of travel: coaches leave daily for all major tourist destinations in Thailand, from Chiang Mai in the North to Ko Pha Ngan in the South, and there are many relatively inexpensive travel agents who can arrange visas and transportion to the neighboring countries of Cambodia, Laos and Malaysia, as well as Vietnam.

Khaosan Road in recent years has become popular with local residents, especially artists and art students. There are several pubs and bars, where backpackers meet to discuss their travels. The area is internationally known as a center of dancing, partying, and just prior to the traditional Thai New Year (Songkran festival) of April 13 to April 15, water splashing that usually turns into a huge water fight. One Thai writer has described Khaosan as "a short road that has the longest dream in the world."

A Buddhist temple under royal patronage, the centuries old Wat Chana Songkram, is directly opposite Khaosarn Road to the west, while the area to the northwest contains an Islamic community and several small mosques.