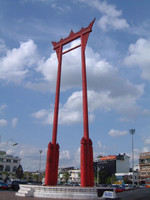 The Giant Swing (Thai: เสาชิงช้า, Sao Ching Cha) is a religious structure in Bangkok, Thailand, Phra Nakhon district, located in front of Wat Suthat temple. It was formerly used an old Brahmin ceremony, and is one of Bangkok's tourist attractions.

The Giant Swing was originally constructed in 1784 in front of the Devasathan shrine by King Rama I. During the reign of Rama II the swing ceremony was discontinued as the swing had become structurally damaged by lightning. In 1920 it was renovated and moved to its current location in order to make space for a gas plant. The ceremony was again performed until 1935, when it was discontinued after several fatal accidents.

The last renovations were done in 1959, and after 45 years of exposure to the elements the wooden pillars were showing signs of serious damage. A major reconstruction began in April 2005. Six teak tree trunks were used. The two used for the main structure of the swing are over 3.5m in circumference and over 30m in height. The remaining four are used for support and are 2.30m in circumference and 20m in height. The swing was taken down in late October 2006 and the work finished late December of the same year. The rebuilt swing was dedicated in royal ceremonies presided over by His Majesty King Bhumibol Adulyadej in September 2007. The timbers of the original swing are preserved in the National Museum.

In 2005, the Giant Swing, together with Wat Suthat, was suggested as a future UNESCO World Heritage Site.

The Ceremony of Tri-yampawai or the Swing Ceremony was one of the 12 royal ceremonies held in each of the months of the Thai lunar calendar in the Sukhothai kingdom. Originally held in the first lunar month, it was moved to the second lunar month in the early Rattanakosin period at the beginning of the 19th century. The ceremony was a Bhramin new year's ceremony and lasted for 10 days.

According to an ancient Hindu epic, after Brahma created the world he sent Shiva to look after it. When Shiva descended to the earth, Naga serpents wrapped around the mountains in order to keep the earth in place. When Shiva found the earth solid, the Nagas moved to the seas in celebration. The Swing Ceremony is a re-enactment of this story. The pillars of the Giant Swing represent the mountains, while the circular base of the swing represents the earth and the seas. In the ceremony Brahmins swing, trying to grab a bag of coins placed on one of the pillars.